Aligning Policy and Evidence for the Age of Complexity

As the world changes in complex and unpredictable ways, Government is changing too.  As it does so, the need grows for policy-making and the evidence that informs it to be alive and responsive to the increasing pervasiveness of complexity.  In public service systems the increase in complexity often means that  no single institution is ever ‘in charge’ or has direct control over how changes unfold.  In response, as policy-makers and service deliverers begin to recognise the new reality of pervasive complexity, we see a fading of inadequate notions of one-size-fits all, predict-and-provide and command-and-control approaches.  Rather, we see a brightening of newer notions such as open policy-making; outcomes-focus; and service-driven adaptive approaches.

One key driver of these shifts is the growing recognition that complexity and uncertainty are pervasive and dominant features in the world with many of the certainties and stabilities of the past being eroded or removed.  A key requirement, then, is to build capacity to set and deliver public policy as these changes unfold.

To help cross the choppy waters, we might look to a number of fundamental principles as navigation aids.  Firstly, the so-called linear model of policy – where policy goals are set, turned into policy designs and then delivered – doesn’t reflect reality.  A classic example is the policy for environmental payments to farmers.  While the goals of the policy are clear (including improving biodiversity); and the design of policy is tightly constrained by the system rules, in reality, pragmatic public service delivery enables more diverse outcomes across environmental, economic and social factors; reflecting the point that policy is made as much in implementation as in design.  Moreover, attempts to remodel policy processes to take account of this e.g. by linking delivery back to goal-setting through a policy review process in a ‘policy-cycle’ are similarly inadequate The environmental payments example illustrates how policy adapts in its implementation and hence doesn’t conform to the cyclical model either that would argue for formal ex post evaluation and review before starting the cycle again with recasting policy goals and policy design..

Rather, ‘policy’ is increasingly seen as a complex and non-linear system, where, multiple relatively autonomous players (such as politicians, businesses, civil society groups and individuals) interact in inherently unpredictable ways. The Institute for Government developed a “more realistic model of policy making” back in 2011 which sees policy-making as a dynamic interplay between the ‘purpose’ (goals), ‘design’ (direction) and ‘realisation’ (action) of policy.  In this model, these are not easily distinguished and continually interact with each other across fuzzy, continuously-moving boundaries. 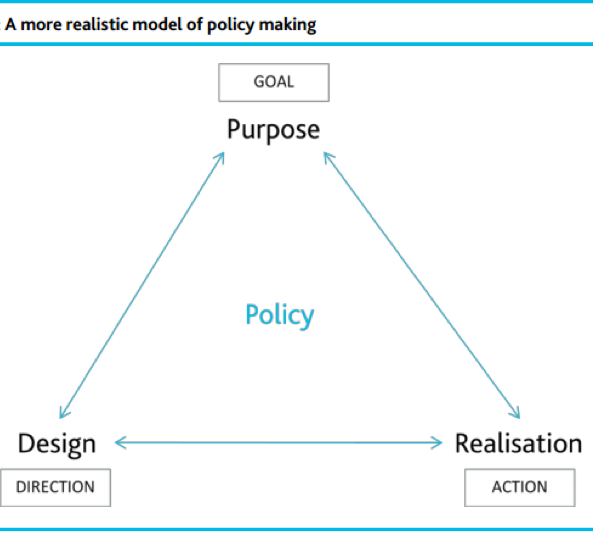 According to the IfG (page 15), fundamental to this model are the following

·       “Policy formulation and implementation are not separate, but intrinsically linked

So, standing in contrast to the more familiar linear or cyclical models, the IfG’s model contests that policy is not simply made then implemented, but is in constant flux within a dynamic system in which ‘system stewards’ and other actors interact in complex, non-linear ways.  Government’s role is seen as one of ‘system stewardship’ in which it is incorrect to say that central departments make policy and others deliver it.  All play key roles in helping to shape the goals, design and realisation of policy.

Seen in this way, ‘evidence’ is inherently embedded within and not separate to policy.  It is an intrinsic part of the system and is embedded in all its elements, supporting this in many ways, in particular helping to frame problems; set goals; decide the rules of the game; shape implementation; and provide feedback (and feed-forward).  Evidence, from a variety of sources (scientific research, practitioners and citizens and service-users) provides insights that contribute to decisions regarding the shaping and delivery of policy.  Without some evidence, policy and delivery would be somewhat hit-and-miss and driven solely by whim and blind faith.

However, in performing all these roles, evidence can only ever inform and not determine policy.  Evidence tells us how the world was, is and might be but not how it should be – this is the realm of values and politics. In performing its functions, evidence helps to make clear the following aspects of the system at and across a range of temporal and spatial scales:

·       the values, attitudes and opinions held regarding the system

·       the options for and effectiveness of interventions in the system

So as government changes, the nature, scope and system dynamics of policy-making will shift and the roles of evidence in informing policy will similarly shift.  Aligning policy and evidence in the age of complexity, then, is crucial. The IfG’s system stewardship model underlines the importance of policy processes learning and the crucial role that feedback plays.  While some of this feedback will be ad hoc, unstructured and potentially skewed, ensuring a sound basis for policy cannot rely on this and formal, structured and objective ex ante (before an intervention) and ex post (after) evaluation will be necessary.  Such evaluations give us robust insights into ‘what works’ and why, for whom and under what circumstances and this supports learning and allows the system to evolve purposefully.

In the IFgS model, the analogy of a football manager is used to illustrate this point (page 11) where “The manager watches the game and sees how it is playing out in practice. The manager watches different parts of the game and tries to see how the team is working together overall. In response to the game, the manager may change the team’s tactics or formation; substitute one player for another; issue instructions to particular players; give a motivational talk at half time.  The manager tries different responses and watches for the effects that ensue.”

CECAN’s principal purpose reflects the need for a more nuanced approach and in developing and applying new methods for evaluation in the age of complexity, its work has never been more important.